Freeing the Nose, an excerpt from Climbing Free, Chapter 12

Returning to El Cap felt like coming home, I realized as I headed up the wall on my first attempt to free the Nose, in 1993. Some twenty years had passed since my first view of this grand monolith, when I had come on a camping trip to Yosemite with my family. Later it had been a rite of passage when I struggled my way up the Nose with Mari and Dean in 1979, climbing the route mostly on aid during our three-day ascent. Then, thirteen years later, I had made the ascent with Hans Florine in just over eight hours. Now, at age thirty-three, my mission was to free climb every inch of this legendary three-thousand-foot rock formation.

My partner was a British climber named Simon Nadin, a tall man with a soft voice and a sunny-faced complexion, whom I had met at a World Cup competition in 1989. That year, Simon had entered his first competition; by year’s end he was the first World Cup champion in the history of the sport. I felt at ease around Simon and respected his understated personality. As a climber, he had bundles of natural talent. In addition to being a good sport climber, Simon was used to doing bold, naturally protected routes in England. Simon, like me, had served an apprenticeship in traditional climbing style as opposed to sport climbing alone. When Simon and I had had a chance encounter at Cave Rock, on the shore of Lake Tahoe, we discovered our mutual desire to try to free climb the Nose. Though Simon had never climbed a big wall, I trusted him to be my partner on this towering cliff where swallows and peregrines swooped. Within an hour of our meeting, Simon had postponed his return flight to Britain. Five days later, we were already two-thirds of the way up the wall, sleeping on a ledge beneath the Great Roof. 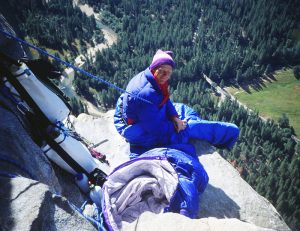 We woke up on our bivy ledge two thousand feet above the ground with the first rays of light spilling into the valley. As we looked down from our perch, the giant pine trees on the Valley floor appeared like small heads of broccoli. Despite our airy position and bright sunshine illuminating the day, I didn’t feel a sense of lightness. Getting to this point had taken us two days, and now, on our third day on the route, the force of gravity was weighing on us heavily. We were twenty-one pitches up the wall, and we had climbed eighteen-hours without pause the previous day, finally quitting at midnight. The fatigue of all that free climbing, and the backbreaking work of dragging up two ropes, a heavy rack of gear, and a cumbersome haulbag, made us wake feeling tired and fuzzy-headed. As I looked at The Great Roof looming above my head, I felt my swollen hands throb with each beat of my heart.

The Great Roof pitch begins with a corner shaped like an open book with a crack at its center. The rock to either side is smooth, and the width of the crack at times pinches down to a quarter of an inch. The corner rises straight up for about a hundred-feet, but then it begins to tilt to the right, leaning over until it becomes a large roof shaped like a breaking wave of granite. To free climb it, a climber must surf sideways on smooth, featureless rock with his or her fingers jammed into the crack above. This was one of the longest pitches of the entire route and its impressive architecture appeared unrelenting in its continuity. To make matters worse, the intensity of the mid summer heat seemed to radiate from the rock, making our skin ooze with perspiration.

“It looks like you get the first shot at leading the Great Roof,” I said, handing the gear over to Simon. We had been alternating leads all the way up the wall. “I guess I’ll give it a try,” he said softly in his adorable English accent. Simon looked graceful as he cruised up the first three-quarters of the pitch, lay backing and jamming his way up the crack that split the center of the right-facing corner. (laybacking is a technique that requires leaning to the side while walking one’s hands and feet against a vertical feature such as a crack or flake). But just before arriving under the Great Roof, his progress came to a distinct halt.

Simon slumped his weight onto the rope and shouted down to me, “The crack is too thin. I can’t even find a way to hang on up here.”

Watching such a talented climber become increasingly frustrated with each unsuccessful effort, I couldn’t help but share his sense of disappointment.

“You might have a better chance at this pitch than me,” he shouted before lowering back down to the belay and turning the lead over.

This was the section that John had in mind when he pointed to my small fingers and said they would be my secret weapon. Ironically, my height of 5 foot, 2 inches is often a shortcoming on the most difficult face climbs, where there are inevitably moves with long reaches between holds, but on the Great Roof, it appeared that the tables were turned and perhaps my small size would be an advantage. 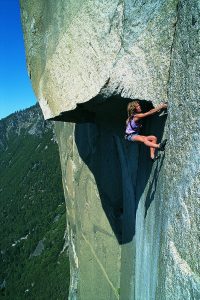 When I arrived at the first difficult section below the roof, I immediately understood why Simon was having such a hard time hanging on. Though I was able to wedge my fingertips into in a few small openings in the crack, the face on either side was utterly devoid of features to stand on. At one point, the only edge of rock I could use to stand on was located at shoulder height and I needed to make a powerful kick just to get my foot up onto this hold. Underneath the roof itself, I had to duck my head down inside the curl of this granite wave, while wedging two fingers tips of each hand straight up into the crack above my head. In order to keep my feet from skating off the smooth surface of the rock, I needed to maintain a perpendicular angle with my feet pressed flat against the vertical wall below. Moving from this rock-surfing position involved strenuous yet delicate tai-chi like dance steps to coordinate finger moves and foot shuffles. After trying countless combinations of hand and foot sequences, my strength and concentration were nearly spent. I knew it would be possible to free climb this pitch, but I wasn’t sure I would have enough strength to do it that day. I didn’t have the luxury of coming back another day, nor did I have the energy to refine the sequence any further. My only hope of free climbing this pitch on my next try was to perform each move with as much grace and finesse as possible. I lowered down to the belay to rest before giving it my best effort. 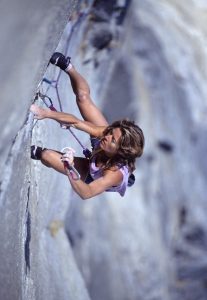 After a twenty-minute rest, I started up again feeling surprisingly strong and fluid. But as soon as I began the most difficult series of moves, my timing was off and my body position faltered. I thrust my fingertips into a small opening in the crack just as my right foot popped off the face. In the next instant, I was airborne, then the rope caught my fall and I swung sideways into the corner. I hung on the rope, panting, with two thousand feet of air below my feet, and then I lowered back to Simon.

“One more try. I’ll do better next time,” I said, voicing my mantra of hopeful determination.

While I rested, a team of Croatian climbers passed us. They moved quickly, climbing in traditional aid style. Down on the meadows I noticed that the pines were casting long shadows. We had limited energy and daylight left. Either I would make the first free ascent of this pitch on my next try, or we would have to abandon our all free attempt and finish climbing to the top.

While resting at the belay, I looked across the valley at the face of Middle Cathedral. On its mottled wall I noticed a play of shadows form the shape of a heart. I have always noticed the symbols around me, and this heart on stone reminded me of the values that have always been most important in my life and in climbing. My own development as a climber has been an extension of the experiences, passion, and vision of others. For me, free climbing the Great Roof was an opportunity to demonstrate the power of having an open mind and spirit. Though I realized that I could easily fall in my exhausted state, I felt a sense of liberation and strength knowing that this was an effort worth trying with all my heart. I had a strong feeling that this ascent was a part of my destiny and that somehow I could tap into that mysterious source of energy to literally rise to the occasion. I said nothing to Simon of my private thoughts, and when I returned to the roof, I realized that this was the moment of truth.